The views expressed here are my own views and not that of CSIRO or DIGO. I have had no involvement with the development of the Sentinel technology and do not represent CSIRO or DIGO in any way.

In January 2003 a state of emergency was declared in Canberra, Australia's capital city. Fire destroyed more than four hundred houses and claimed four lives. One of the emergency systems overloaded by the magnitude of the disaster was a web based application used by to track the fires by satellite. The author will talk about how observed the developing crisis from his home office and followed how the system coped and was improved to deal with the unexpected demand. New research being conducted in Canberra on high bandwidth application and digital video will be discussed and how it could be used to cope with natural disasters and other threats, such as terrorism.

Introduction: a state of emergency in the ACT

ACT Chief Minister, has declared a state of emergency in the ACT.

Powers of control have been given to Peter Lucas-Smith, Alternative Territory Controller.

This is an official emergency announcement. The ACT Emergency Services Bureau has advised that there has been a major deterioration in the ACT fire situation. There is increasing risk due to fire spotting from the fires to the west...

The ACT Emergency Services Bureau showed good web design skills in evolving their web site in a low text fashion. As information became available it was added to the emergency services page. One problem was that at the time of the emergency there was no clear link from the ACT Government home page to the emergency web site, this was fixed shortly afterward.

Canberra's fire emergency has claimed one life and up to 100 homes, with two dozen suburbs still considered in danger.

More than 2,000 people have fled their homes amid a fire emergency in and around Canberra.

In January the Sentinel Fire Mapping System was announced:

Australian scientists have joined forces with Defence, CSIRO and Geoscience Australia to develop an online bushfire map that will help firefighters better detect and monitor blazes that threaten lives and property this bushfire season.

The Sentinel Hotspots system was launched today. It is online at http://www.sentinel.csiro.au.

The maps have been created using satellite images of Australia’s surface temperature to detect and monitor bushfire hotspots as they develop and shift location.

Firefighters and other emergency personnel can then overlay road networks, airports, water courses and other logistical information, giving them a comprehensive online bushfire picture. ... 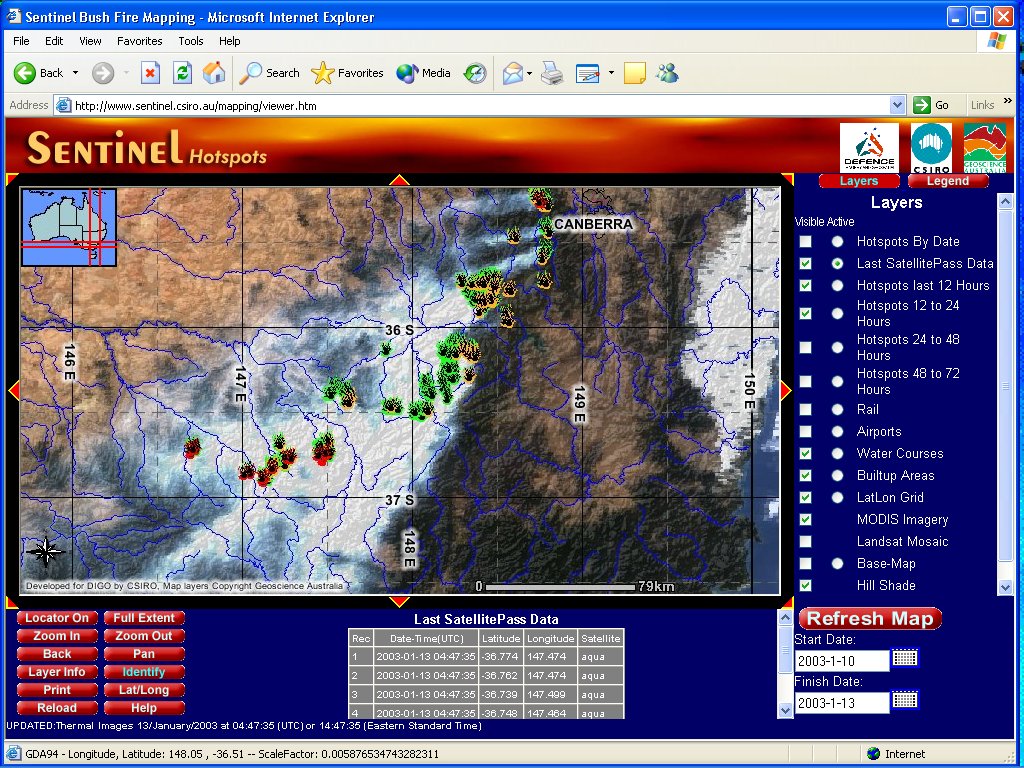 This service was created for the general public good and accordingly the web address of the live system was provided in the announcement and the public was invited to use it. As a result of the fire crisis the system quickly became overloaded. The system administrators placed a message on the front page requesting that the general public refrain from using the system, to allow access for firefighters, but it was clear that the system was still overloaded.

The obvious step which Sentinel personnel took was to set up a secure and introduce user ids and passwords for emergency personnel. However, as the public system had already been advertised they could not simply cut off public access. A way was needed to lessen the load on the system, while still providing open access. The contingency plan put in place by the Sentinel personnel was to offer pre-prepared maps up front for the general public (preferably on a different server) and make the link to the interactive system less visible. The interactive system could be used to prepare maps which the general public would be most likely to use and then those stored on a separate web server. This assumed the load on the system was coming from the interactive generation of the maps and simply sending them from a web server (even a different web server) would have less impact on emergency services. This was implemented and seemed to help somewhat.

A further modification was to limit the precision of the requests which users could make for custom maps (effectively to snap to a grid) and to label the resulting image files with the parameters used (either directly or with a hash function). The result would be that many users would request exactly the same map and it could be cached. In addition the images could be stored in more efficient formats and the user interface modified to conform to accessibility standards. As well as improve the efficiency of the system, allowing more users, it would enable personnel in the field with wireless hand held terminals to use the system.

An examination of the code of generated web pages showed the Sentinel application used the mapping application “Arcturus“. Detailed documentation of this system was available on-line and the best overview was in the manual for customising the HTML viewer. This showed ArcIMS uses Java and an SQL DBMS. This has an XML interface, ArcXML, for sending parameters to the server. There are several font ends available but Sentinel used the simplest with DHTML, CSS and JavaScript. The HTML and parameters for Sentinel were in one directory and JavaScript libraries in another. Listing of the files in these directories had been disallowed, but the files are as per the ArcIMS documentation, allowing each file to be retrieved by giving the file name.

The task then was to add a new entry in the system's parameters file, to set the resolution of the grid and then adding code to snap area requests to the grid. This required one line added to the parameter file and eight lines of JavaScript code to be added:

This is an example of code that could be used in an Internet map serving system:

// Check gridResolution has a sensible value


This code example could provide a useful modification to the Sentinel site. Given high level of use during the bushfire emergency it would have been unwise to introduce this change into an operational system. New Sentinel systems are being built for other countries and this change may be incorporated in them. This initiative of CSIRO and Defence Imagery & Geospatial Organisation (DIGO) proved its worth and further funding should be provided to expand the system.

Limitations of the Web

Before modifying or creating a web site for emergency use, keep in mind the limitations of the web. To view a web site the user requires a working computer, with electrical power and an Internet connection. Also the user needs to know that there is useful information on the web, where and when to find it. Other information services, such as telephone, e-mail, facsimile and radio may be more effective for immediate communication. However, you can provide a web address, for example in a radio broadcast or a mail message to a predefined list, to provide more detailed information.

The Grid: Future for Emergency Use?

The Internet for Emergency Use

Using the Internet for dealing with emergencies is not a new idea:

When cyclones, earthquakes or other calamities next strike in India, district officials in many areas can go online and quickly mobilize support for evacuation, search and rescue, medical aid and other relief priorities.

Launched by Deputy Prime Minister and Union Home Minister Lal Krishna Advani recently in New Delhi, the India Disaster Resource Network (IDRN) is part of the nationwide Disaster Risk Management Programme, a joint initiative by the Government and UNDP that aims to reduce the vulnerability of communities in 169 districts in 17 States most at risk.

IDRN includes a nationwide inventory of resources, such as equipment and experts in various fields, required for emergency response to disasters.

Mr. Advani opened the network through a video conference with Chief Ministers of five States —- among them Orissa, at risk for cyclones, and Gujarat, prone to earthquakes — together with West Bengal, Assam and Maharashtra. These States have contributed to the IDRN online database. ...

Two new buzz phrases in IT research are “Grid Computing” and “The Access Grid”. The idea of Grid computing is to have standardised supercomputer access via a high speed network:

Grid computing is a form of distributed computing that involves coordinating and sharing computing, application, data, storage, or network resources across dynamic and geographically dispersed organizations. Grid technologies promise to change the way organizations tackle complex computational problems. However, the vision of large scale resource sharing is not yet a reality in many areas — Grid computing is an evolving area of computing, where standards and technology are still being developed to enable this new paradigm.

It should be kept in mind that the high performance computers used need not be traditional supercomputers:

Computer centres need not be located in expensive and vulnerable inner city office buildings. The computers can be at low cost outer industrial areas. These can be modified pallet warehouses with a concrete floor and steel walls. The roof can be used for electricity generating solar collectors. Only maintenance staff need know the location.

From: Establishment and Platform for an E-government System and its Security, For the delegation from the Zhejiang Provincial Government Information Development of P.R. China, Tom Worthington, October 2003: http://www.tomw.net.au/2003/egov.html

For emergency purposes, more interesting that the Grid's computing capacity is its use for collaboration. Accompanying software tools for networking are those for building standardised high bandwidth videoconferencing rooms, called access grid nodes.

Access Grid nodes being built in Canberra could be used by emergency service personnel to trial the facilities. The experience from these could be used to build access grid nodes into emergency situation rooms in Canberra, to produce transportable units to be installed in temporary rooms as required.

The Access Grid™ is an ensemble of resources including multimedia large-format displays, presentation and interactive environments, and interfaces to Grid middleware and to visualization environments.

Software and documentation for building an access grid node can be downloaded. An access grid differs from commercial videoconferencing in using high resolution services (for example a minimum of 3072x768 shared pixel display screen) and reliance on Internet networking. However, it is possible to interface low bandwidth and commercial video conferencing systems to the access grid nodes. Also as experience is gained it is likely that much of the technology will be adopted for ordinary Internet users.

Two hundred access grid nodes are currently listed world wide (including several dozen in Australia). The network is still at the stage where nodes are listed in one simple alphabetical list:

The room where the Australian Computer Society holds it regular Canberra meetings has been equipped as ANU Access Grid Node Number 1. One Australian Grid project is GrangeNet:

The GrangeNet network will consist of a backbone linking Melbourne, Canberra, Sydney and Brisbane connected to GrangeNet Points-of-Presence (POPs) at the AARNet sites in each city. Gigabit Ethernet tails will connect clients to the GrangeNet backbone. The backbone is connected the AARNet international network at Sydney providing access to the global research and education networks.

Tom Worthington Chief Investigator, Australian Creative Resources Archive Project. He is an independent information technology consultant and Visiting Fellow in the Department of Computer Science at ANU, where he lectures on electronic commerce and web technology. Tom is one of the architects of the Commonwealth Government's Internet strategy and was the first Web Master for the Australian Department of Defence. In 1999 he was elected a Fellow of the Australian Computer Society for his contribution to the development of public Internet policy. Tom is also a member of the Institute of Electrical and Electronics Engineers and the Association for Computing Machinery.